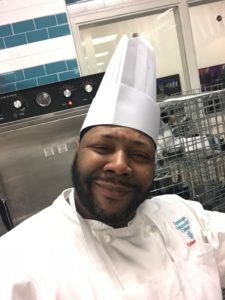 Thomas Simpson had not given up on himself after failing out of school – he took another path, and became a chef. At the time of his case with Legal Aid, Thomas was working at one of Cleveland’s premier restaurants, a dining destination that routinely makes those “best in the city” lists. He was working hard and doing his best to support his three children. Still, a $4,000 bill was enough to destabilize his family’s finances and jeopardize his career.

You see, several years ago, Thomas enrolled in college with a financial aid scholarship. Unfortunately, life circumstances prevented him from attending a significant amount of classes that first semester. The financial aid policies allowed a student to keep their aid with good grades and attendance.  Unfortunately, Thomas had to give up his federally funded financial aid, called a Title IV Grant, for that semester, because he didn’t pass his classes and didn’t meet the 60% class attendance requirement.

The next semester, Thomas tried again: he went to all his classes and took all his finals but still struggled academically.  The school determined, for the second semester, that Thomas had again relinquished his right to a Title IV Grant.

Seven years later, the school surprised Thomas with a lawsuit, claiming he owed them money.

Thomas represented himself pro se in the litigation, successfully filing an answer and actively participating in the initial case management conference. But when the school filed a motion for summary judgment, Thomas didn’t know the right next step.  He did not realize the motion could dispose of his case before he could present his facts, so he did not oppose the motion.  The judge decided in favor of the school and Thomas now owed more than $4000.

Determined not to give up, Thomas reached out to Legal Aid to see what could be done about the adverse judgment. Legal Aid connected Thomas with volunteer attorney Pat Haggerty from Frantz Ward. Pat was moved by Thomas’s case, and began working on it along with an associate at his firm, Justin Younker.

The duo helped Justin file a motion for relief from judgement, and included an affidavit from Thomas testifying that he had indeed attended more than 60% of one of his courses.  The motion was granted, and Thomas’s case was re-opened. “We started to work on discovery,” says Justin, “and focused on finding out how the school managed attendance records. Turns out, they don’t take attendance.”

Pat and Justin deposed a staff member of the finance department at the school to clarify the school’s policy regarding the return of Title IV funds. The staff member relayed that the university does not, in fact, monitor individual student class attendance.  Despite this admission, the Thomas still didn’t prevail and the case was appealed.  In their argument to the appeals court judge, the attorneys provided evidence from appellate cases in the 10th District which highlight the agreement between a university and a student is in fact a contract, and the contractual terms are found within an institution’s published policies. Thomas’s school couldn’t prove they upheld their end of the contract.

The appeals court judge ruled in Thomas’s favor.  The case created new precedent in the 8th District and will protect other people like Thomas.

Justin was passionate about Thomas’s case, which he worked on with Pat for two years. “He’s just a great guy,” Justin says of his client. “He works all the time. He’s doing all the right things, and he just required a little additional help to get past this hiccup.”

“Pat and I think he’s going to have his own restaurant someday,” Justin adds. “He has it in him. We wanted to do everything we could to make sure this unfair situation didn’t hold him back.”