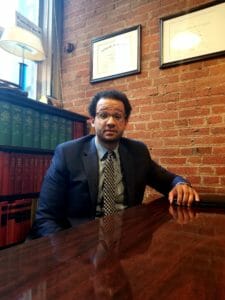 Daniel Tirfagnehu, Esq., a 2014 graduate of Case Western Reserve School of Law, has a funny story about how he became one of more than 3,000 volunteer attorneys for Legal Aid. “Legal Aid was holding a clinic for attorneys on how to handle expulsion hearings,” he says. “I went for the free lunch.” Joking aside, Tirfagnehu says he saw a connection between expulsions and his own law practice. “I’m a criminal defense lawyer,” Tirfagnehu says. “Expulsions are kind of a natural expansion of that because it’s people facing discipline.”

One such student facing discipline was “Evelyn,” a 7th grader with intellectual disabilities who was attending a local school. On a day when class got rowdy, Evelyn joined in the fray and threw a book at another student. Her teacher overstepped and physically restrained her. When Evelyn defended herself, the school moved to expel her.

Evelyn’s parents got in touch with Legal Aid, and the case was referred to Attorney Tirfagnehu. “The stakes are really high in these expulsion hearings,” Tirfagnehu says. “Expulsions can hurt kids for the rest of their lives.”

Research supports this assertion. In 2014, the Department of Education published a series of resources for schools that linked exclusionary policies (suspensions and expulsions) with increased
likelihood of dropouts, substance abuse, and involvement with the criminal justice system.

“It’s good to have lawyers in these cases where students are getting into really serious trouble and are looking at getting expelled,” added Tirfagnehu.

After taking on Evelyn’s case, Tirfagnehu spoke to Evelyn’s mother to gather more details about the incident. He then went to work advocating for the girl’s rights, arguing in her defense at school administrative hearings and in meetings with the superintendent. The school district eventually agreed to dismiss the expulsion proceedings. The district also agreed to set Evelyn up for success by providing her with the supports she’d need because of her disability. Thanks to Tirfagnehu, Evelyn was able to stay in school and continue on her path to high school graduation.

When asked why he continues to represent students, Tirfagnehu says it’s because people need assistance and he has the skillset to help them. “If I was a baker,” he says, “I would hope that every once in a while I would give out a cake for free to someone who couldn’t afford it… If you have a couple of hours to help people that need help, why not?”