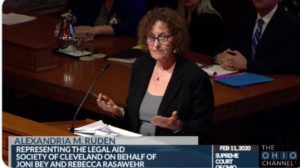 Today, Legal Aid attorney Alexandria Ruden, Esq., helped argue in the case of Bey vs. Rasawehr in front of the Ohio Supreme Court.

Ruden advocated on behalf of Joni Bey and Rebecca Rasawehr, who won a civil protection order (CPO) against Jeffrey Rasawehr in 2017. In addition to requiring a certain amount of physical separation between the two parties, the CPO stipulated that Jeffrey could not post on social media about Joni or Rebecca. He had been posting false accusations and lies about them, claiming they had been involved in the murder of Bey’s husband, among other things. The two women say these kinds of actions constitute harassment and caused them much distress.

Rasawehr appealed the CPO on the grounds that it infringed on his constitutional right to free speech. After the appeals court affirmed the trial court’s decision, Rasawehr again appealed, and The Ohio Supreme Court agreed to hear the case. Bey vs. Rasawehr has garnered national attention from free speech advocacy groups.

The court now seeks to answer one question: Is the additional language regarding future online postings an unconstitutional prior restraint on free speech?