#MyLegalAidStory: How Legal Aid Impacted the Life of One Cleveland Police Officer, Created Positive Ripple Effect for Others 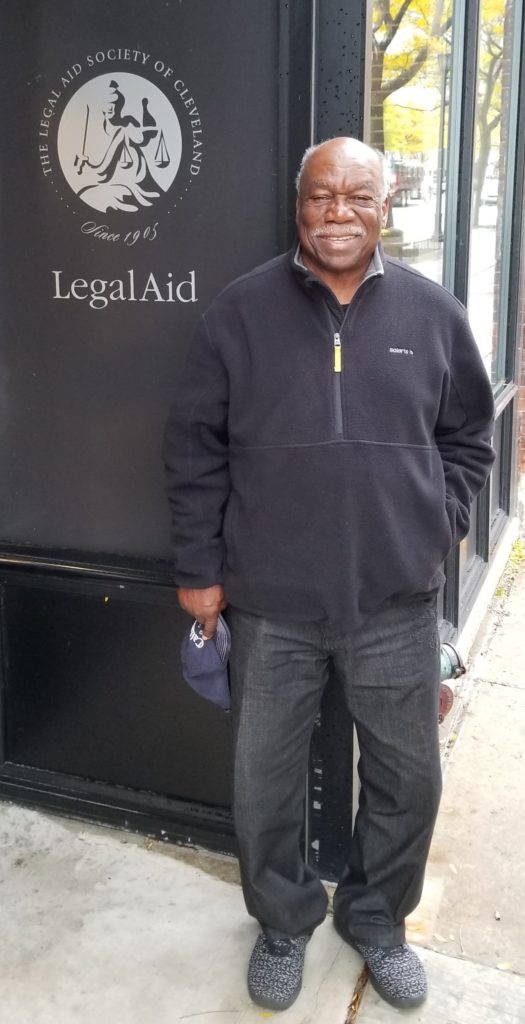 A chance encounter while driving for Uber led William Tell on a trip down memory lane.  He met a Legal Aid staff member who was returning to the office after a meeting across town.  She was in a hurry, so she called an Uber.  William - driving an Uber to support his retirement golf habit – got excited when he noticed the destination: “Legal Aid.”  He couldn’t help but share his own personal story of Legal Aid – from the 1970’s!

William was a member of the “Black Shield,” a brotherhood of black police officers that was founded in 1946. In the early ‘70s, the Shield fought against the police department’s hiring procedures, which they claimed were discriminatory. For years, all of the department’s higher-ranking officers were white men – even as more black men (and more women) were joining the force. Despite the fact that there were more black officers than ever before, qualified black candidates were consistently passed over for white ones, resulting in a police force that looked quite different from the population of the city it served.

Legal Aid represented the Black Shield in Shield Club vs. the City of Cleveland, which was heard in the U.S. District Court for the Northern District of Ohio.

The judge ruled that the police force should be more representative of the city’s population at large, and mandated a “consent decree” to ensure diversity was upheld. Based on city demographics, a certain percentage of the police force had to be African-American. This held for the force in general and for leadership positions.

Because of Legal Aid’s advocacy, William was one of the first black police officers to be promoted to Sargent as a result of the new consent decree.

William led the department’s bicycle squad for a while, and later became the first minority lieutenant to head the detective bureau.

William fondly recalls the days when he’d have his bike squad stop by an elementary school to help students with reading. They even formed a basketball team to take on the school’s teachers – in William’s telling, “thought they didn’t like cops … then all of a sudden, they’re rooting for these cops to beat their teachers!” William was born and raised in Cleveland, and his presence was a comfort to the residents that knew him as the former paper boy from down the street.

“They felt comfortable telling me about crimes and problems that were going on. I used to tell them, bring your kids into the station, I’ll talk to ‘em. I also set aside an hour or two every day when community members could call me on the phone and talk to me directly, about any concerns at all.”

William celebrated a milestone this year: October 17th was the 50th anniversary of his swearing in as a Cleveland Police Officer. The gregarious grandfather helped organize a reunion for all 61 of the officers sworn in that year.

William says what he liked most about being a police officer was, “being able to help people…. You’re in a position of authority, and you need to use that to do something good for someone every day. It’s a discretionary profession, and it’s wide-ranging. That’s a lot of responsibility.”

Mr. Tell is one of thousands of former Legal Aid clients who can attest to the importance of Legal Aid advocacy – not only for himself, but an entire community.  Read more evidence on the long-term impact of Legal Aid in a study completed by the Center for Community Solutions this year at www.LegalAidImpact.org.