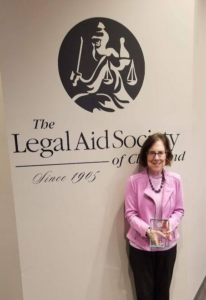 The Legal Aid Society of Cleveland recognized attorney Julie Rabin, a partner at Rabin & Rabin Co., LPA in Cleveland, with the 2021 Legacy of Justice Award.

The Legacy of Justice Award is presented annually to an individual whose participation in pro bono or other volunteer efforts has been significant in terms of length and/or impact.

Rabin, a Pepper Pike resident, has been a bankruptcy attorney in Northeast Ohio for more than 30 years and a longtime supporter of Legal Aid, according to a news release.

She was instrumental in creating a bankruptcy referral project at Legal Aid more than 15 years ago and has remained an active volunteer ever since, the release stated. Since 2000, Rabin has volunteered on more than 70 pro bono cases, helping hundreds of clients escape from debt and get back on their feet, the release said.

Attorneys Ashley Bailes, James King and Arthur Smialek were presented with Access to Justice Awards for their contributions to advancing Legal Aid’s mission.

Retiring board member attorney Barbara Roman was also recognized for her six years of service on Legal Aid’s board of directors.

The Legal Aid Society of Cleveland relies on the dedication and expertise of volunteers to assist its many clients, and each year, approximately 20% of the people helped by Legal Aid are assisted by a pro bono attorney, the release said.